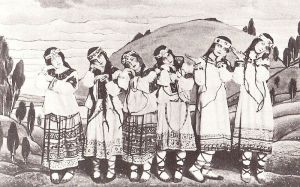 The scene at the Theatre des Champs-Elysees in Paris on May 29, 1913, resembled more a brawl of Beitar Jerusalem soccer fans than a ballet performance. Witnesses reported that all sorts of objects were lobbed at the orchestra, and the choreographer, Vaslav Nijinsky, the legendary dancer and muse of the Ballet Russes, had to shout counts to the dancers who couldn’t hear over the din.

It’s hard to imagine such a visceral response these days. We’re all so polite in our seats. If we hate something, we applaud lightly then go home and eviscerate it online. But that night, 100 years ago today, has become legendary in its demonstration that art can be inciting.

“The Rite of Spring” has inspired choreographers ever since. Everyone, it seems, wants to put her or his stamp on it, perhaps in hopes of garnering even a fraction of that raw, initial reaction.

There’s certainly a long line of venerable dance makers over the past century – from Pina Bausch to Shen Wei – who have found inspiration in Stravinsky’s score and the provocative premise. The theme of sacrifice, after all, is something that we continue to grapple with in the 21st century. We have to ask: Who are today’s victims? What are we sacrificing now?

But perhaps the line of dancemakers weighing in is too long.

Imagine if every filmmaker – from Spielberg to Soderbergh – decided they just had to do their own version of, say, “Citizen Kane.” It might be devoured by film geeks but it doesn’t exactly push the medium forward and it can alienate new viewers who don’t get the wink. By constantly referencing its past to the point of obsession, is dance merely cannibalizing itself?

Edited from an earlier version which appeared in Israel’s Haaretz newspaper.