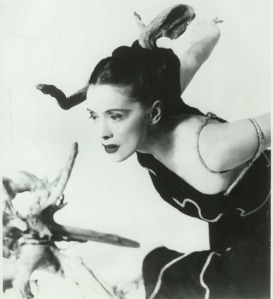 The English translation of “Tel Aviv” refers to the combination of the old and the new, an idea expressed this past weekend through two dance performances that celebrated the past and the future of dance in Israel.

Representing the past, the Martha Graham Dance Company received an enthusiastic homecoming this weekend in Tel Aviv.  It can be referred to as a “homecoming” because the mother of American modern dance was no stranger to the Holy Land.  She played an important role in the development of dance in Israel in 1964 as a co-founder of the Batsheva Dance Company, the company that still reigns as Israel’s premiere contemporary dance troupe and one of the country’s most celebrated and important cultural ambassadors abroad.  While one would be hard-pressed to find any trace of Graham in the company today, nevertheless Israeli’s know that a debt of gratitude is owed the choreographer, who passed away in 1991.

Watching Graham’s works today is a bit like watching a classic Hollywood film with, say Bette Davis or Judy Garland; melodramas delivered by larger-than-life characters. At the time of Graham’s creations, the flexed feet and curved spines and arched leaps were as shocking and refreshing as the rainbow of Technicolor that swept through film at around the same time.

The first work on the program in Tel Aviv, “Embattled Garden”, visited Adam & Eve in the Garden of Eden. The second, “Chronicle”, was Graham’s pivotal three-part commentary on society in the throes of war and depression (from 1936).  “Death and Entrances,” considered the inner lives of the Bronte sisters, and the final work, the “Maple-Leaf Rag” (the last work that Graham created before she died), offered a playful and poignant swan-song that seemed to encapsulate her entire life.

The design of Graham’s work, particularly the “Embattled Garden” set by long-time collaborator Isamu Noguchi, and the costumes, especially the silks and ruffles worn in the Bronte piece by Halston, are bold and bright and not particularly subtle, which fit well with the sharply defined gestures and overly expressive faces.

The result is that Graham can feel a bit dated both aesthetically and dramatically.  But watching Graham is a rare opportunity to watch dance history “live on stage,” as they say.  One would never mistake her work for that of a contemporary company.  But that’s not to say that there isn’t something relevant and powerful still in Graham’s art, the way that those big studio Hollywood films will always be classics.

In particular, “Chronicle,” consisting of all women, convincingly conveys the momentum of war and social upheaval as it sweeps through our lives quickly and unexpectedly, something Israeli audiences might be familiar with.  And the “Maple Leaf Rag,” while a purely entertaining and joyful romp, also carries sad hints of nostalgia and reflection that give the work dimension and depth beyond the skippy music.

On the other side of town, at the Suzanne Dellal Centre, where Graham’s offspring Batsheva is a resident company, the annual Curtain Up Festival celebrated all that is new and forward thinking in Israeli contemporary dance.  It’s unclear whether the majority of the young crowd that crammed into the theatre (an eighth of the size of the Opera House) knew who Graham was, or what role she had in Israeli dance, or that her company was performing only twenty minutes away. Had they known, its unlikely that many would have been able to afford tickets to see her (the cheapest being more than twice as much as a ticket to Curtain Up).

And what was on stage at Curtain Up (at least on Friday night when I caught the second program, curated by Sahar Azimi) was a far cry from the grandness of Martha.  Instead, the four works offered intimate snapshots of undefined relationships set in ambiguous times and places.  The white floor and black background provided a stark, impersonal context.  Nude leotards or bland, loose costumes dominated aesthetically, true to contemporary tastes.  All were merely suggestive in terms of themes and stories (if one could even find a theme or story) in contrast to Graham who often followed a clear narrative with defined intentions (as explained to the audience prior to each section by current Graham Artistic Director Janet Elber).

But whereas Martha demands to be observed from a distance, the four small works at Curtain Up invite one to step inside.  Doron Raz’s “Valentia” captured a duet of anguished beauty between two women who might have been two halves of the same whole.  Gili Navot’s solo “Subject to Change” shifted from a stammering awkwardness, to confidence and grace.  Noa Zuk’s “SPEAKER” placed her three human dancers in the middle of what might have been a video game – the body morphed into a wired machine responding to sonic stimuli, perhaps external, perhaps internal.

Roy Assaf’s “Six Years Later…” followed the growth and development of a relationship through the years, and through several musical genres, including Beethoven’s ubiquitous “Moonlight Sonata.” Are choreographer’s even allowed to use that one anymore?  Can we retire it along with Avro Part’s “Spiegel im Spiegel” or anything by Bjork?  Well, if choreographers can infuse such overplayed songs with the freshness that Assaf did, all is fair game again.

His embracing duet, which devoured the stage in exciting bites, found a new urgency in Beethoven’s quiet composition.  The subsequent shift to a folksy rock tune and casual chatter between the dancers reminded us that this is a relationship for normal people as well and that love can be both as elegant and elevated as the perfect sonata, while also as simple and down-to-earth as a guitar riff.

And, of course, when you thought the story had reached an easy and comfortable end, Assaf concluded with a section of opera to remind us that love and life, however they start and end and wherever they take us, are always epic journeys.  And that’s something with which Martha Graham would happily agree.